The number of datasets published in the Web of Data as part of the Linked Data Cloud is constantly increasing. The Linked Data paradigm is based on the unconstrained publication of information by different publishers, and the interlinking of Web resources across knowledge bases. In most cases, the cross-dataset links are not explicit in the dataset and must be automatically determined using Instance Matching (IM) and Link Discovery tools amongst others. The large variety of techniques requires their comparative evaluation to determine which one is best suited for a given context. Performing such an assessment generally requires well-defined and widely accepted benchmarks to determine the weak and strong points of the proposed techniques and/or tools.

A number of real and synthetic benchmarks that address diﬀerent data linking challenges have been proposed for evaluating the performance of such systems. So far, only a limited number of link discovery benchmarks target the problem of linking geo-spatial entities. However, some of the largest knowledge bases on the Linked Open Data Web are geospatial knowledge bases (e.g., LinkedGeoData with more than 30 billion triples). Linking spatial resources requires techniques that diﬀer from the classical mostly string-based approaches. In particular, considering the topology of the spatial resources and the topological relations between them is of central importance to systems driven by spatial data.

We believe that due to the large amount of available geospatial datasets employed in Linked Data and in several domains, it is critical that benchmarks for geospatial link discovery are developed.

The aim of the Task is to test the performance of Link Discovery tools that implement string-based as well as topological approaches for identifying matching instances and spatial entities. The different frameworks will be evaluated for both accuracy (precision, recall and f-measure) and time performance.

The goal of the SPIMBENCH task is to determine when two instances describe the same Creative Work. A dataset is composed of a Tbox (contains the ontology and the instances) and corresponding Abox (contains only the instances). The datasets share almost the same ontology (with some difference in the properties’ level, due to the structure-based transformations). What we expect from participants. Participants are requested to match instances in the source dataset (Tbox1) against the instances of the target dataset (Tbox2). The task goal is to produce a set of mappings between the pairs of matching instances that are found to refer to the same real-world entity. An instance in the source (Tbox1) dataset can have none or one matching counterparts in the target dataset (Tbox2). We ask the participants to map only instances of Creative Works (http://www.bbc.co.uk/ontologies/creativework/NewsItem, http://www.bbc.co.uk/ontologies/creativework/BlogPost and http://www.bbc.co.uk/ontologies/creativework/Programme) and not the instances of the other classes.

We use the TomTom and Spaten datasets in order to create the appropriate benchmarks.

TomTom provides a Synthetic Trace Generator developed in the context of the HOBBIT Project, that facilitates the creation of an arbitrary volume of data from statistical descriptions of vehicle traffic. More specifically, it generates traces, with a trace being a list of (longitude, latitude) pairs recorded by one device (phone, car, etc.) throughout one day. TomTom was the only data generator in the first version of SPgen. Spaten is an open-source configurable spatio-temporal and textual dataset generator, that can produce large volumes of data based on realistic user behavior. Spaten extracts GPS traces from realistic routes utilizing the Google Maps API, and combines them with real POIs and relevant user comments crawled from TripAdvisor. Spaten publicly offers GB-size datasets with millions of check-ins and GPS traces. This version of the challenge will comprise the Spatial task that measures how well the systems can identify DE-9IM (Dimensionally Extended nine-Intersection Model) topological relations [2]. The supported spatial relations are the following: Equals, Disjoint, Touches, Contains/Within, Covers/CoveredBy, Intersects, Crosses, Overlaps and the traces are represented in Well-known text (WKT) format. For each relation, a different pair of source and target dataset will be given to the participants. 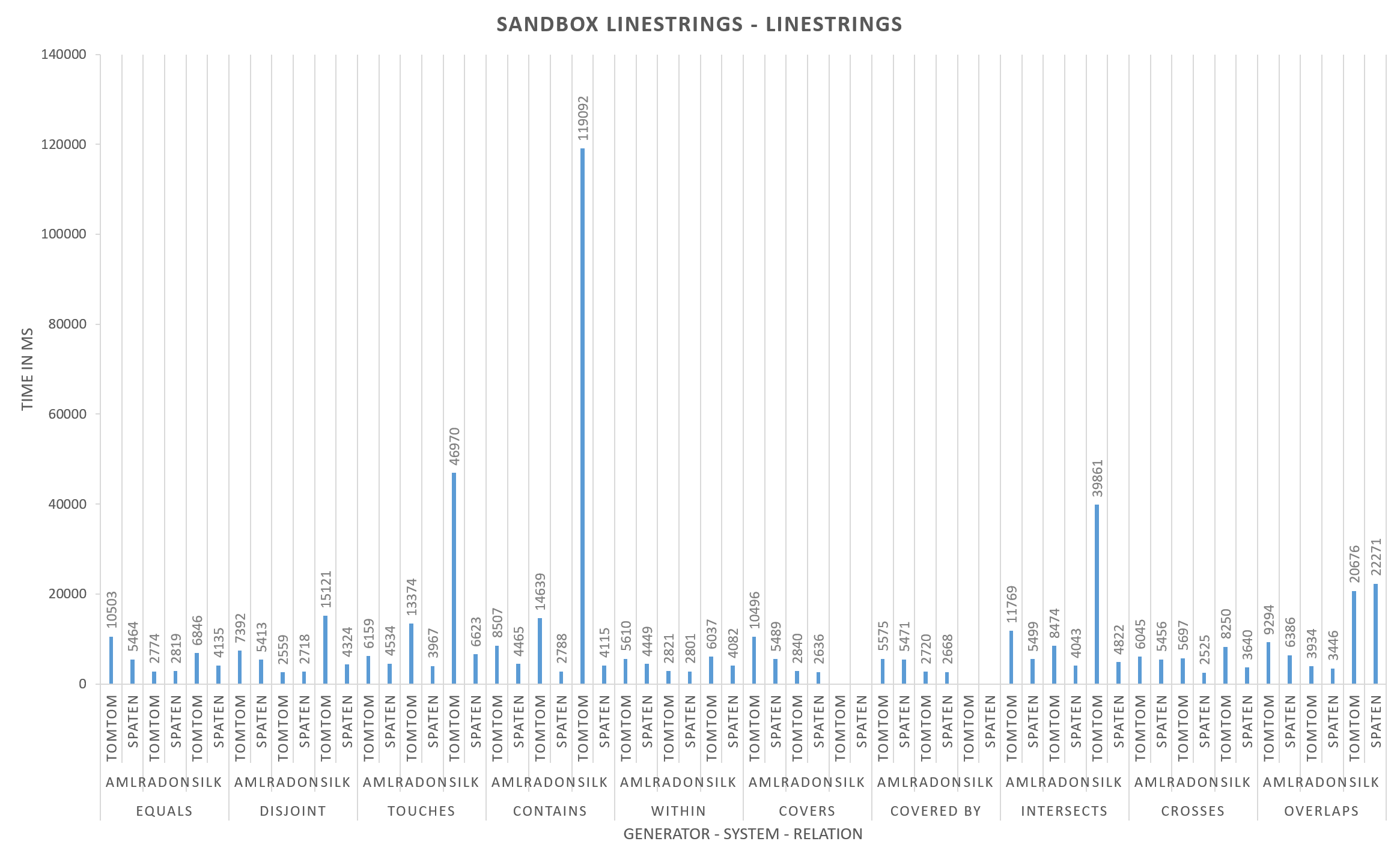 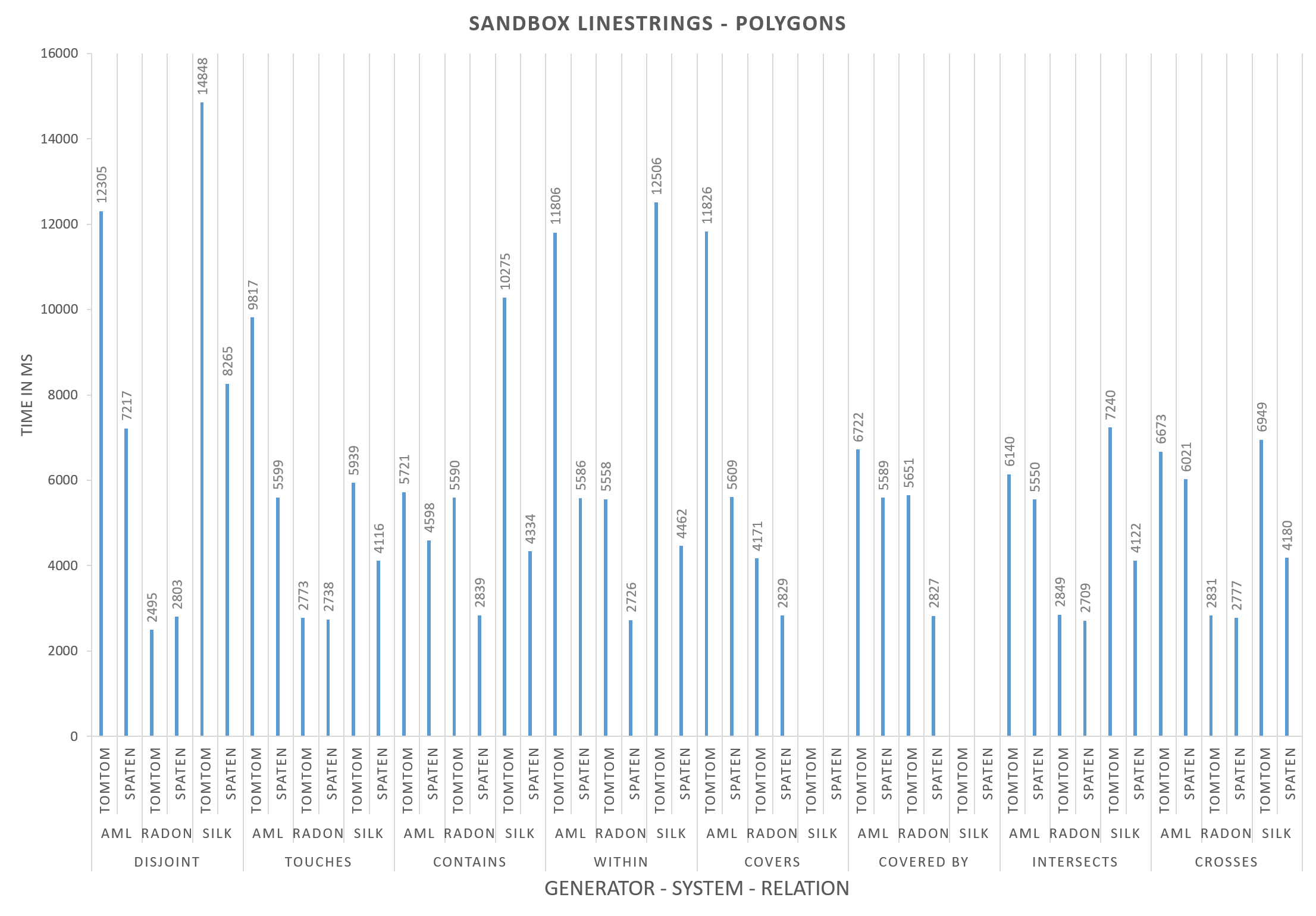 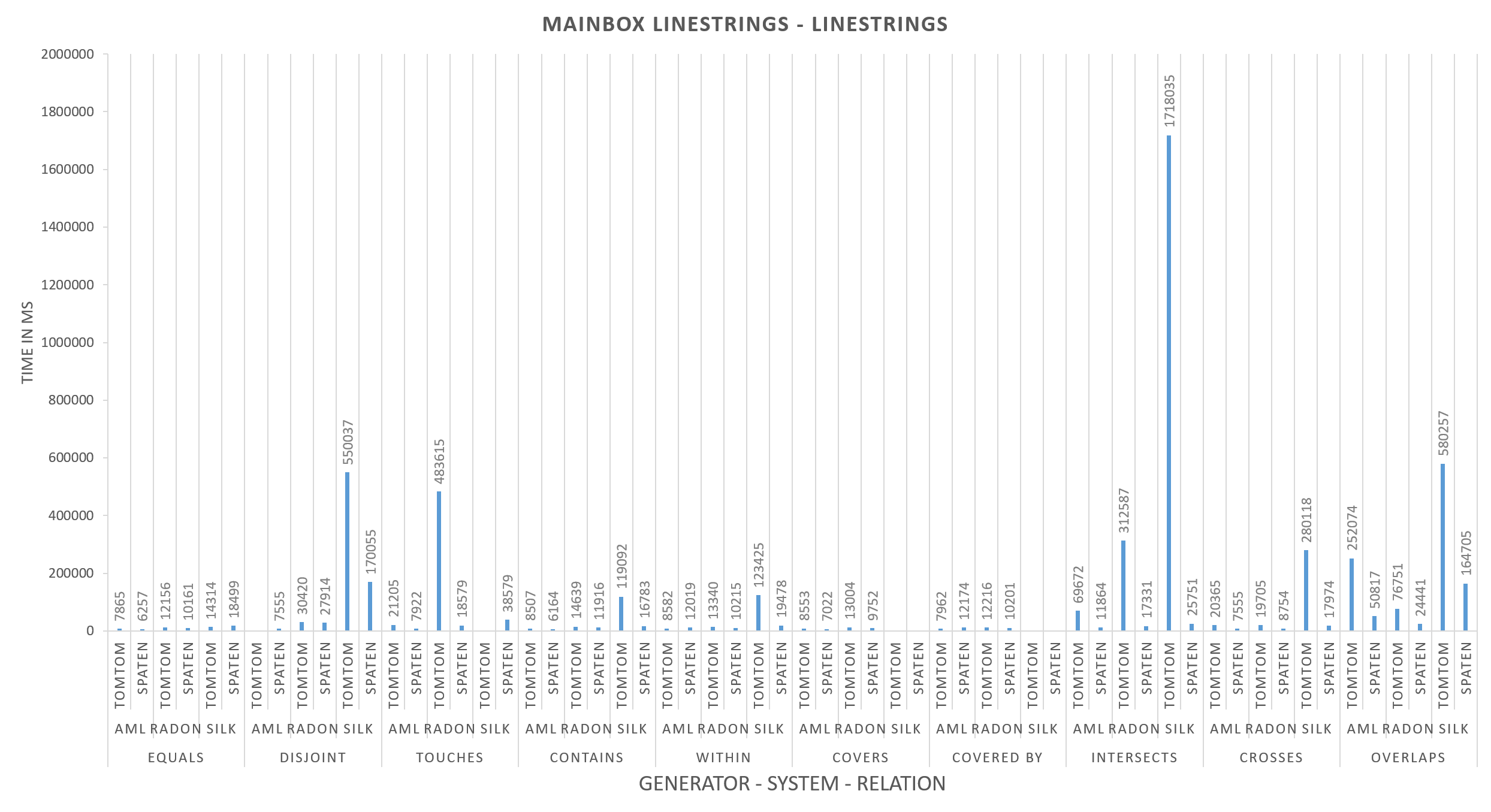 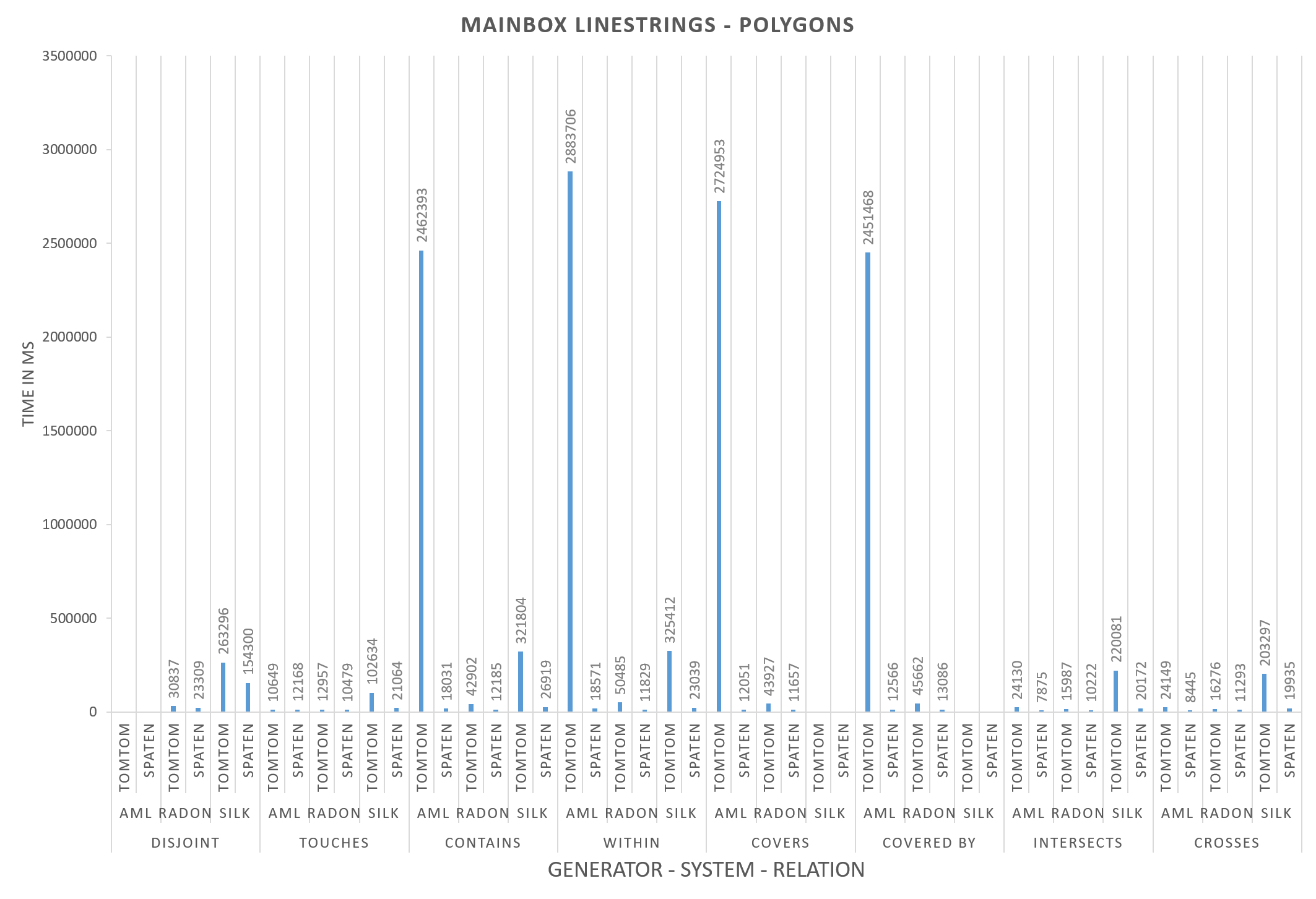 Program Committee (to be completed):

We appreciate support from the Trentino as a Lab initiative of the European Network of the Living Labs at Trentino Digitale, the EU SEALS project, as well as the Pistoia Alliance Ontologies Mapping project and IBM Research.

[1] Saveta, E. Daskalaki, G. Flouris, I. Fundulaki, and A. Ngonga-Ngomo. LANCE: Piercing to the Heart of Instance Matching Tools. In ISWC, 2015.